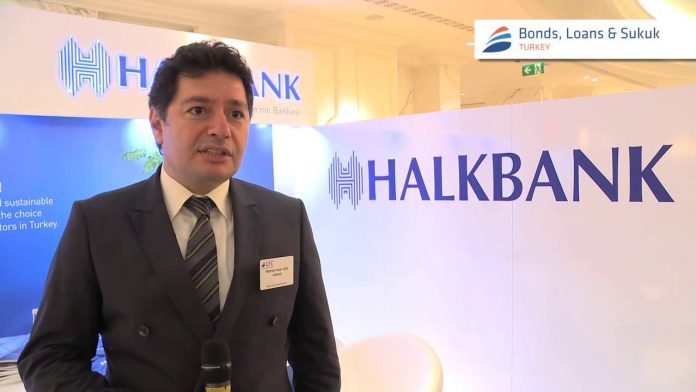 A senior executive at one of Turkey’s largest state-owned banks was arrested in the U.S. on charges of conspiring to evade trade sanctions on Iran, escalating a case that has prompted diplomatic tensions and political maneuvering between the two countries.

Mehmet Hakan Atilla, a deputy chief executive officer at Turkiye Halk Bankasi AS, is accused of conspiring with Reza Zarrab, an Iranian-Turkish gold trader, to launder hundreds of millions of dollars through the U.S. financial system on behalf of Iran and its companies.

Atilla was taken into custody Monday night, a prosecutor told a magistrate judge at a hearing on Tuesday. Atilla didn’t enter a plea or make any statements during the brief court appearance. An interpreter translated the proceedings for him. He was ordered held without bail.

Atilla’s arrest comes at a delicate time in U.S.-Turkish relations. Turkey is historically one of the west’s strongest allies in the Middle East. But Zarrab’s arrest and divergent strategies over Syria’s civil war and its fallout have raised tensions between U.S. and Turkey.

“At the very least, if there was a situation like this, they could have shared it with Turkey in advance,” Zeybekci said. The banker “could have been invited to testify,” he said.

The Turkish lira weakened as much as 1.2 percent against the U.S. dollar following news of the arrest.

Atilla “protected and hid Zarrab’s ability to provide access to international financial networks.” That included providing gold and currency to Iran through the bank, while creating false documents to make the transactions appear to be food so they would fall within humanitarian exceptions to the sanctions law, according to court documents filed by the U.S.

The U.S. relies on wiretapped conversations involving Zarrab, Atilla and several informants, who aren’t named, to support its case against the banker, including Zarrab’s reference to the allegedly fake food shipments.

“Do you know what’s stirring the pot?” Zarrab asked one of the confidential informants in a 2013 phone conversation, according to the U.S. “The document you turned in. They wrote Dubai as the origin of the wheat. The man says wheat doesn’t grow in Dubai.”

Prosecutors claimed the hiring of Giuliani and Mukasey might present a conflict of interest because their firms also represent some of the banks alleged to be victims in Zarrab’s case.

Mukasey’s son, Marc, has been widely speculated as a candidate to become the New York U.S. Attorney under Trump, after the firing of Preet Bharara earlier this month. Prosecutors said in a court filing Monday that Giuliani and Mukasey were hired to try to reach a settlement in the case, though neither will be involved in court proceedings.

Bharara led the investigations of Zarrab and Atilla. His firing brought relief to members of the Turkish government and caused a jump in the shares of Halkbank.

Zarrab, owner and operator of Royal Holdings A.S., is accused of using his multibillion-dollar network of companies in Turkey and the United Arab Emirates to induce U.S. banks to process transactions for Iran’s benefit.

The U.S. has said it has evidence that Zarrab paid millions of dollars in bribes to Turkish government officials and top executives at Halkbank, which allegedly helped Zarrab process the payments.

Zarrab was a key figure in a 2013 scandal, in which Turkish prosecutors accused him of bribing the country’s cabinet ministers in a gold-trading operation worth at least $12 billion, a charge he denied. Erdogan called the investigation a coup attempt, and all charges against Zarrab and members of his administration were eventually dropped.

Suleyman Aslan, the former CEO of Halkbank, was among dozens arrested as part of a December 2013 probe into gold smuggling, money laundering and bribery in government tenders. Aslan was taken into custody after police raided his home and found $4.5 million stuffed into shoeboxes — money the CEO said was intended as “charitable donations.”

He was later released and charges were dropped, as they were against all the suspects. The prosecutors who brought the charges were either arrested, sacked or fled. While there were no charges against Atilla at the time, Turkish prosecutors cited transcripts of his conversations with Zarrab as evidence against him.

One migrant killed, 45 rescued off Turkish coast en route to...

One dead as 6.3-magnitude quake strikes Greece and Turkey