Home News | Haberler English News US delegation to visit Turkey on Oct 16 in bid to resolve... 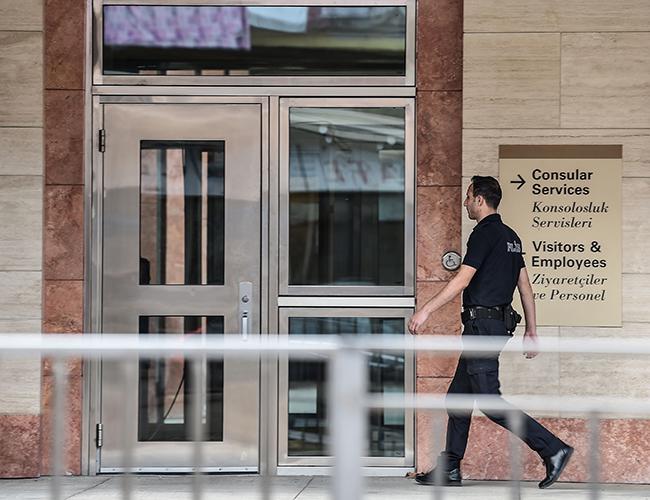 A delegation from the U.S. chaired by Assistant Secretary Jonathan Cohen will visit Turkey on Oct. 16 as part of efforts to resolve the ongoing diplomatic crisis disagreements between the two countries.

The idea of discussions between Turkish and U.S. officials on regional developments and bilateral ties was actually set during a meeting between President Recep Tayyip Erdoğan and U.S. President Donald Trump at their last meeting, an official in Ankara told the Hürriyet Daily News.

The visit was therefore planned before the latest spat between Turkey and the U.S. over the former’s arrest of U.S. Consulate staff in Istanbul, the official added.

Washington hopes that tension between the U.S. and Turkey will be defused, State Department spokeswoman Heather Nauert said late on Oct. 12.

“We hope that Turkey is not trying to create some distance between us,” Nauert told reporters in a daily press briefing.

She said the Turkish government was asked for evidence after the arrest of two local staff at U.S. missions in Turkey and stressed the importance that they be able to see their lawyers.

“We would hope for some calm and that we can have a dialogue with the government of Turkey. But we also have some very real concerns about whether or not Turkey intends to cooperate with the United States and in terms of its investigations,” Nauert said.

The U.S. Embassy in Turkey announced on Oct. 8 that it was suspending the issuance of non-immigrant visas to Turkish nationals in the country following the arrest of Metin Topuz, a Turkish employee at the U.S. Consulate in Istanbul. In a retaliatory move, Turkey’s U.S. Embassy also suspended non-immigrant visa services.

Topuz met with his lawyers on Oct. 13 at a prison on the outskirts of Istanbul.

The Istanbul Chief Prosecutor’s office, meanwhile, said Topuz met his lawyers on Sept. 30, Oct. 2 and Oct. 3, prior to the latest meeting.