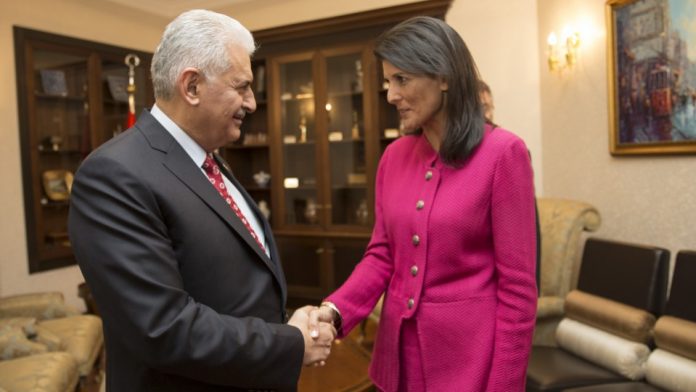 US Ambassador to the UN Nikki Haley is on a two-day visit to Turkey to discuss the Syrian refugee crisis.

US Ambassador to the UN Nikki Haley is on a two-day visit to Turkey to check how Syrian refugees “are coping, day in and day out.” Haley’s trip’s agenda includes an overview of the UN humanitarian work and to highlight the US aid response.

On Tuesday, she met Turkish Prime Minister Binali Yildirim in Ankara to deliberate on the Syrian refugee crisis.

Sources say, they discussed the facilities and services provided to the foreign nationals, especially Syrians, who have taken refuge in Turkey.

We had a constructive meeting with Turkish Prime Minister Yildirim. pic.twitter.com/5IvDmlWyAH

Speaking to staff at the US Embassy in Ankara, Hayey lauded Turkey’s efforts for sheltering Syrian refugees.

“But know that the United States is leading in this region again. We are not going to let chemical weapons happen to the Syrian people anymore,” she said.

The Syrian war, which has now entered its seventh year, has displaced millions internally along with hundreds of thousands fleeing to the neighbouring states.

Turkey is home to nearly three million Syrian people according to the Turkey’s Directorate General of Migration Management. This number accounts for around 45 percent of all Syrian refugees in the region, according to the UN.