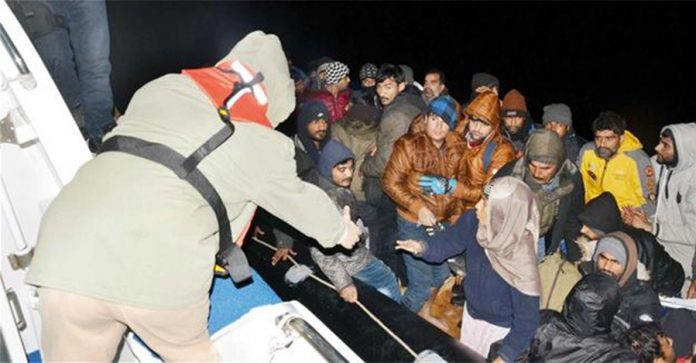 One migrant was killed and 45 others were rescued off a coast on Turkey’s northern Aegean Sea en route to Greece’s Lesbos Island early Feb. 5.A group of 46 migrants sailed from Turkey’s western province of Çanakkale’s Ayvacık district early Feb. 5 in a rubber dinghy with the aim of reaching Lesbos.

The boat sunk around two nautical miles off the Turkish coast after its engine broke, state-run Anadolu Agency reported.

While 45 of the migrants were rescued by Turkish Coast Guard vessels, the body of a missing Ethiopian woman washed ashore hours after the incident.

This came one day after Turkey’s Interior Ministry said on Feb. 4 that a total of 422 migrants were intercepted by Turkish police over the last week en route to Greek islands.

According to a statement issued by the ministry, the operations were carried out between Jan. 27 and Feb. 3.

Turkish Coast Guard patrol officers have apprehended 56 migrants offshore trying to cross the Aegean Sea between the southwestern Bodrum peninsula and the Greek island of Kos.

The statement said that in the resort district of Çeşme, west of the İzmir province, Coast Guard patrol officers also apprehended 85 migrants who aimed to reach the Greek island of Chios.

In separate incidents, 281 migrants were also spotted in the Marmara and Mediterranean seas, the ministry said.

Thousands of people have made short but dangerous attempts to cross the Aegean Sea in a bid to reach Greece, before going on to northern and western Europe.

More than a million refugees and migrants travelled from Turkey to Greece last year before an EU-Turkey deal stemmed the flow in March.

The agreement allows for the return of “irregular migrants” to Turkey from Greece in exchange for Syrian refugees to be relocated within the EU, along with other pledges.

Of the 4,715 migrants and refugees who lost their lives trying to cross the Mediterranean in 2016, 429 migrants died in the Eastern Mediterranean route between Turkey and Greece, according to the International Organization for Migration.