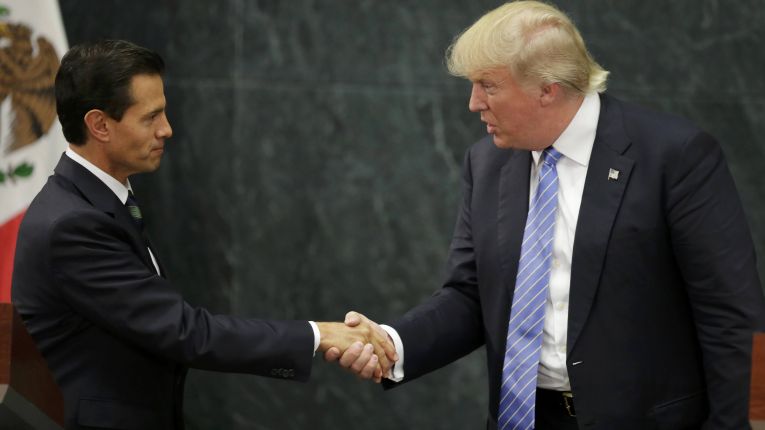 When Donald Trump first kicked off his campaign to become the president of the United States last June, he devoted a large portion of his 40-minute speech to bashing immigrants from Mexico.

“When Mexico sends its people, they’re not sending their best,” Trump said during his announcement speech in New York.

Referring to the nation itself, Trump said plainly: Mexico “[is] not our friend, believe me.”

Though he left many incensed with what they saw as inflammatory and incendiary language, the speech would go on to set the tone for the rhetoric Trump would employ throughout the course of the campaigns and into the general election.

Over the next 14 months, Trump based much of his campaign on characterising Mexican immigrants in the US as criminals and “rapists” who are “bringing drugs” into the United States.

In a bid to raise the stakes and appeal to his base, Trump accelerated his anti-immigrant, anti-Mexico rhetoric by saying he would make Mexico pay for a massive multi-million dollar wall along their border with the United States.

In June, he claimed that US District Judge Gonzalo Curiel, son of Mexican immigrants, was not qualified to preside over a hearing regarding his now defunct Trump University strictly due to his repeated calls for the border wall.

“I’m building a wall … It’s an inherent conflict of interest,” Trump said to The Wall Street Journal in his own defence.

Fast forward to 14 months later, Trump, having secured the Republican nomination, stood by side-by-side with Mexican President Enrique Pena Nieto — who had compared the real estate mogul to Hitler and Mussolini — in Mexico City.

The Wednesday visit came at the invitation of Pena Nieto, who had also extended the same invite to Hillary Clinton, Trump’s Democratic rival.

The president and the Republican nominee held a closed-door meeting in the Mexican capital. Trump characterised the meeting as “a thoughtful and substantive conversation.”

In his closing remarks at a joint press conference, Trump, who had previously claimed there was no possibility of fraternity between the neighbouring nations, thanked the Mexican president by saying: “I call you a friend.”

The sudden declaration of friendship served as an odd close to a visit that had left many Latinos on both sides of the border “baffled,” Maria Beltran, a student at the American University in Washington, DC, said.

From the outset, Latinos found themselves questioning Pena Nieto’s judgment when he extended the offer to both candidates last Friday.

Trump’s immigration position is muddy & angry after today, just like before. But now he will say he gets along with the president of Mexico.

“There is nothing we Mexicans need to prove to the Republican candidate. We don’t need his validation,” said Camila Ruiz Segovia, an activist from Mexico City who is currently studying at Brown University in Rhode Island.

Ruiz Segovia was among the thousands outraged at the thought of Trump coming to a nation he had spent more than a year disparaging.

The Mexican student at an Ivy League university said that in opening Mexico’s doors to a man like Trump, Pena Nieto may be giving credence to American presidential candidate’s rhetoric.

Not how it works

Though their president posed for photo opportunities and engaged in a lengthy discussion with Trump, the Mexican people, said Ruiz Segovia, have responded to the GOP nominee’s visit to their country through “rightful outrage and indignation.”

At a campaign stop in Ohio, Clinton said the outrage Trump has incited among Latinos in the US — who number more than 50 million — and Mexicans, cannot be so easily forgotten.

“That is not how it works,” Hillary Clinton says of Donald Trump trying to make amends with Mexico trip. pic.twitter.com/mjnEMXJXLD

“It certainly takes more, for a year of insults and insinuations, than by dropping in on our neighbours for a few hours and then flying home again, that’s not how it works,” Clinton said on the day of Trump’s Mexican visit.

Tim Kaine, Clinton’s running mate, took an even greater jab at Trump, saying he “paid a little fly-by to Mexico”.

Kaine then mocked Trump for the conflicting narrative that came out of the meeting with the Mexican president.

At Wednesday’s press conference, Trump said his proposed border wall was discussed, but the matter of payment was not addressed. Pena Nieto refuted this retelling in a tweet.

“Mexico will not pay for the wall,” Pena Nieto said. The Mexican president went to say he had witnesses who would attest to his account of the meeting.

Kaine capitalised on the disagreement and used it to accuse Trump of backing away from his declarations.

“[Trump] walked into a meeting with the Mexican president. And after saying for months that we’re going to build a wall and Mexico’s going to pay for it, he just forgot to bring that up … No, he didn’t have the guts to look the Mexican president in the eye and bring up the central position in the campaign,” Kaine said to CBS News.

Brent Wilkes, national executive director of the League of United Latin American Citizens, the largest and oldest Latino organisation in the US, said beyond not wanting to seem partisan, Pena Nieto likely had his own interests in mind when inviting Trump.

“If by some miracle Trump were to have somehow changed his militant tone and adopted a new rhetoric towards Mexico and immigration, then Pena Nieto could have taken credit for that about-face.”

The potential for that change, admitted Wilkes, was low. At a subsequent campaign stop in the Southwestern state of Arizona, Trump proved the visit had little, if any, impact on his rhetoric.

At that event, only hours after his stop in Mexico City, Trump called for the creation of a “deportation task force,” which he says would target “the most dangerous criminal illegal immigrants.” To do this, the Republican hopeful said he would triple the number of immigration officers responsible for deportation.

Though pundits and political analysts had spent much of the preceding week saying Trump was beginning to display signs of ‘softening’ his immigration policy, Latino voters remained sceptical.

However, Wilkes said “without any real details,” Trump’s words amounted to little more than a “less militant” version of the divisive statements he had espoused in the past.

Ruiz Segovia, the Brown University student, said even if Trump had stood by his seemingly less hostile rhetoric, it would have been too little too late.

Though Trump has spent nearly the entirety of his presidential bid attacking Mexico and immigrants, the people’s anger — in both nations — was not limited to the GOP nominee. Many, were equally upset at the Mexican president for even extending the invitation.

Among the slogans on placards held at a protest in the Mexican capital was one that read: “Trump and Pena out.”

“As a daughter of Mexican immigrants I am offended the Mexican president didn’t publicly denounce Trump’s racist hatred of Mexicans and immigrants coming to the US,” said Monica Perez, who has worked in politics for more than 20 years.

Can we build the wall now, while trump is in Mexico?

The invitation highlighted Pena Nieto “is not a clever politician,” said Ruiz Segovia.

Even his declaration that “Mexicans in the United States are honest, hard-working people. They are people [who] respect family, they respect life in the community, and they are respectful of the law. As such, Mexicans deserve everyone’s respect,” could not save Pena Nieto from his critics in and out of the government.

Hours after their meeting, Pena Nieto continued to criticise his guest, saying, “His policy stances could represent a huge threat to Mexico … I am not prepared to keep my arms crossed and do nothing … That risk, that threat, must be confronted. I told him that is not the way to build a mutually beneficial relationship for both nations.”

Mexican politicians used the visit as a chance to blast Pena Nieto, who is saddled with an approval rating of 23 per cent. Trump fares even worse, scoring only a four per cent favourability rating in Mexico.

Margarita Zavala, former first lady of Mexico, who has reportedly expressed interest in the presidency herself, took to Twitter to lambast Trump, and by extension, Pena Nieto.

“Mexicans have dignity and repudiate his hate speech,” Zavala wrote.

Vicente Fox, who served as the president of Mexico from 2000 to 2006, also used the occasion to take a swipe at both men.

“Mexico is not yours to play with, show some respect,” Fox said in a tweet addressed at Trump after the two got into an online spat over a previous invitation he had extended to Trump.

With the Mexican president currently facing accusations that he had plagiarised his 1991 law school thesis — including allegations that he had copied 20 paragraphs word-for-word — Beltran, the American University student, said Trump’s visit may have been a way for Pena Nieto to draw attention away from himself.

“It’s called ‘el truco chino’; to replace a scandal with an even bigger scandal.”

US threatens to take unilateral action if UN fails to act...

Girl And Her Dog Rescue A Mother Goat And Her Newborn...